Following the end of the war, he and his young family left New Jersey for the West seeking new homes and the promise of more prosperous times. In 1786, he moved to West Liberty, Ohio County, Virginia (now West Virginia) and resided a few years near Wheeling, Virginia. In 1793, with other families of that vicinity, he moved to Waterford, the frontier settlement on the Muskingum River, near Marietta, Ohio. They were entitled to lands on the tract donated by Congress to those who had defended their country. They chose a selection about four miles above Fort Frye, at the mouth of Olive Green Creek, on the bank of the Muskingum river. They prepared a stockade garrison, to which they moved, and began to improve their lands. The Indians watched them closely, and one of their party was killed by them.

In 1797, Ephraim Cutler, the proprietor of several shares in the Ohio Company’s purchase, ascertaining that a considerable amount of his lands were situated on the waters of Federal creek in Athens County, Ohio, sought to develop this fertile farmland. Accompanied by George Ewing, they explored a way through the wilderness, cutting out a pack-horse path, twenty miles in length, from Waterford to Federal Creek. About the 1st of March, 1798, Ewing’s family moved to Athens County and settled on what is now known as the Thomas Gardiner farm. George was ever ready to promote schools, the library, and the good of the people. He was fond of reading; was intelligent; possessed a fund of sterling sense, combined with lively wit and good humor. He sometimes indulged in a natural propensity for poetic and sarcastic descriptions and often served on juries at the freehold courts that were held to settle conflicting claims on the college lands at Athens. There were one or two individuals sometimes employed as advocates, demagogues, who frequently made sad havoc with the king’s English. He could not help versifying some of these bombastic speeches, which he did in a masterly manner, but always in a vein of good humor.

George’s son, Thomas, recalled a story about his father that is certainly worth sharing. “My father was always a very polite man, far more so than most of the settlers about us. But I remember once when he was not. One day when I was about fifteen he and I were working in the cornfield when a finely dressed rider stopped and asked if we could entertain him for the night. My father agreed, but very coldly, and told me to show him to the cabin. I took his horse and tried to be very polite to make up for my father’s unusual rudeness. We had a wonderful evening and the visitor told many interesting stories, but my father would not unbend. Next morning he asked me to go with the stranger the mile that courtesy required of a host, and when I came back he told me who the visitor was. It was Aaron Burr, who had killed the great Alexander Hamilton.”

George and his family lived in Athens Co. for 20 years. In May of 1818, at the age of 64, George and his wife Rachel, moved to Perry County, Indiana with the following members of his family: son George Jr and wife Hannah Boyle; daughter Abigail Padgett, daughter Rachel Hannah Harris, and daughter Jane Hunter Ewing and her husband Elijah Latimer.

It is believed that George died in Perry County on January 15, 1824, however, there is some confusion because this date does not match the tombstone inscription of 20 Feb 1821. The 1824 date is most reliable since a letter exists written by Geoge Ewing, dated 5 March 1823.

In June of 1907, under the direction and supervision of John G. Ewing (b. 1860), the remains and tombstones of George Ewing and Rachel Harris were removed from their original gravesites on the banks of the Ohio River in Tobin Township and were placed in Cliff Cemetery, Cannelton, Indiana. 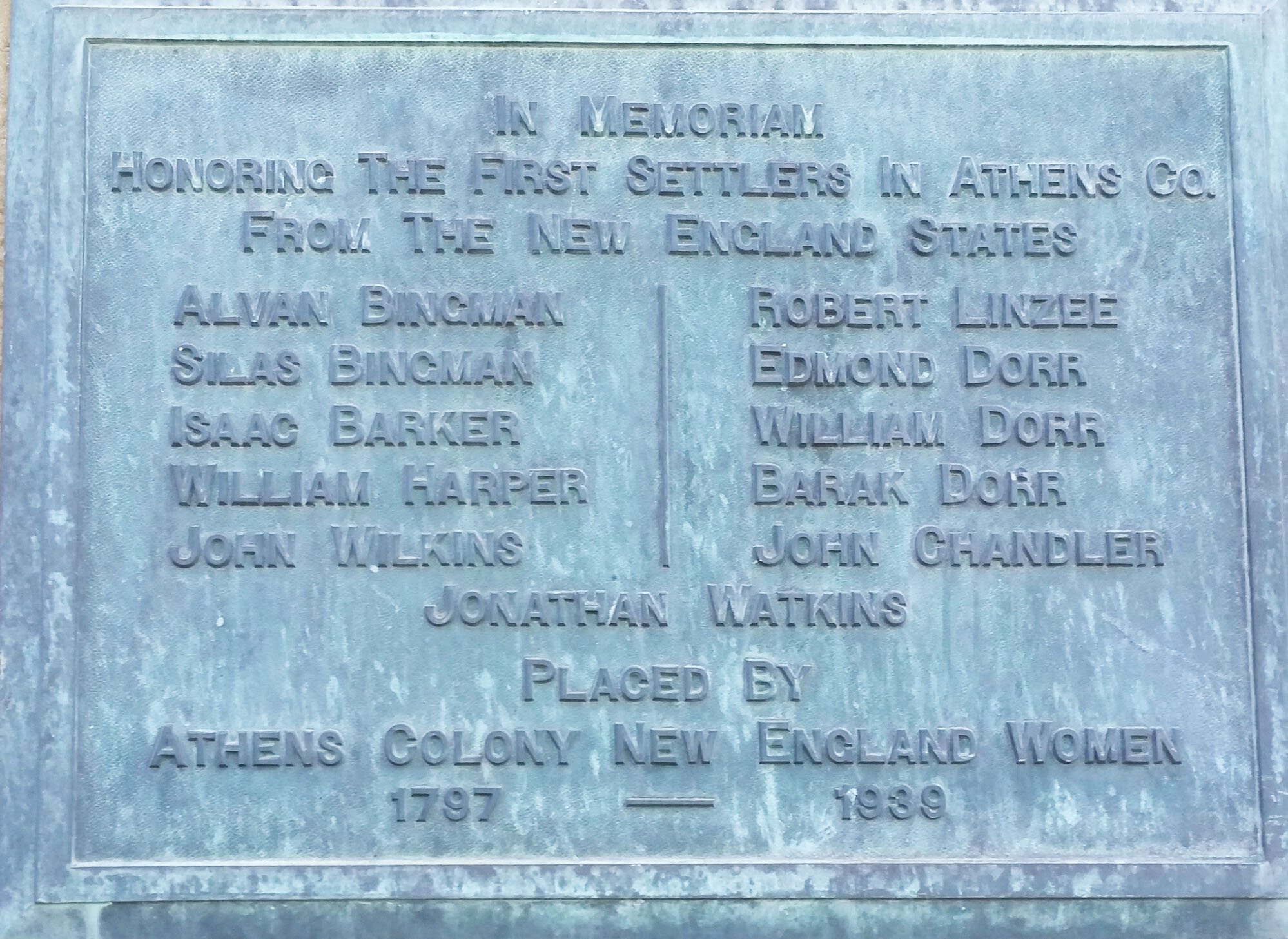 +3
A plaque that honors the founders of Athens County from New England, many of whom were veterans of the War of Independence.